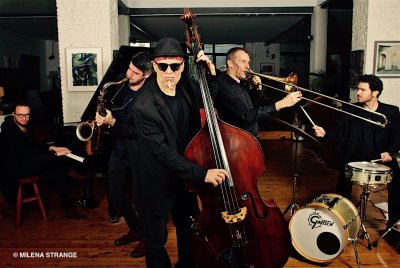 A landmark of the Brussels jazz scene since 1986, the Club changed management in 2021 so as to continue to offer the convivial atmosphere of a real jazz club in the capital of Europe.

A non-profit organisation, Buen Vivir, acquired 28 rue de la Tulipe, with a view to using it for its resistance and resilience activities to uphold human rights. But the new owners also wanted to ensure the continuation of Sounds’ jazz-related activities and so contacted pianist Joachim Caffonnette, a pillar of non-profit musical activities in Brussels and himself a musician who had taken his first musical steps on the boards of the stage at Sounds. Joachim put together a team of music and cultural sector professionals and with Emmanuel André and Fanny De Marco set up the Sounds Live non-profit organisation.

Sounds Live has thrown its energy and dedication into the project to revive the club, redecorated the beautiful early 20th century venue, refreshed the food and drinks menu, laid the foundations for a sustainable future and launched a crowdfunding project, whose huge success bears witness to the enthusiasm of live music lovers, and will stage a grand re-opening concert on 18 November 2021, thus launching the second chapter in the history of this esteemed club.

When Sergio Duvaloni and Rosy Merlini arrived in Bruxelles in the summer of 1985, they only planned to stay a few months. But a chance conversation with a taxi driver alerted Sergio to the fact that a business was for sale at 28 rue de la Tulipe. He fell in love with the place and decided to buy it for his wife Rosy’s birthday. What started as a rock and rhythm and blues café soon evolved into a jazz club, following advice from Brussels jazz club legend Pol Lenders, whose own Bierodrome was a stone’s throw away at the corner of the street.

Since then, Sounds has not only hosted the pick of the Belgian modern jazz scene, including Philip Catherine, Aka Moon and Steve Houben, but also served as a stepping stone for many jazz musicians who would go on to become pillars of Belgian jazz over the years: Eric Legnini, the Brussels Jazz Orchestra, Octurn, Nathalie Loriers, Melanie De Biaso, Daniel Romeo, Jef Neve, Greg Houben, Pascal Mohy, Jean-Paul Estievenart, Antoine Pierre, Igor Gehenot and Margaux Vranken, to name but a few… The club’s reputation has spread worldwide and since the 1990s it has welcomed such internationally-famous artists as Charlie Mariano, Joe LaBarbera, John Abercrombie, Paolo Fresu, Mark Turner, John Scofield, Rosario Giuliani, Jonathan Kreisberg and Jacky Terrasson.

Sounds overcame every crisis as it arose, organising its famous jam sessions and offering the possibility for groups to play regularly, and so develop their repertoire, under the beady eye of its legendary boss.

Really great to see that this old established jazz venue, has not only survived the transition from the previous owner, but continues to thrive. It's a truism, that jazz owes a great deal to the enthusiasm of individuals.